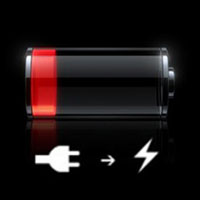 My brother came from New York to visit with me in San Diego over the Thanksgiving Holiday.  During his visit, he was frustrated by the fact that his brand new iPhone 4s battery could not last through the day!

I did not pay to much attention to his ranting on this subject, but during his 10 day visit, his iPhone battery charge never lasted more than half the day before it was a dead as a stone.     For the Christmas holidays I traveled to New York from San Diego.   During the first day, I noticed that phone had shut off because the batter had gone dead.   Never having experienced that before and, owing to the fact that I have my iPhone 4s wrapped in a case that has an expansion battery pack built in, I concluded that I must have forgotten to charge it over night.

That night I made sure to charge both the iPhone and the external battery case.  Next day, not half way through lunch, I noted my iPhone had gone dead again, burning through both the internal battery and the external battery?   WTF?   My brother started laughing as I now knew exactly what he was talking about during his visit to the left coast.   In my line of work (VoIP Tech Support), being without a cell phone is stress inducing to say the least!  I set about trying to figure out what was different and why my phone could not last a day before running out of battery juice?

What made this all the more interesting was the fact that I travel with an iPad2 as well?  Both devices have the same IOS level? My iPad was also a 3G model, so I concluded that AT&T roaming was not the issue.  After all, would it not effect both devices the same if the issue was related to roaming on the 3G network?  It must be something different about the two devices?   I then set about turning off everything I could think of in the iPhone.   I turned of the most obvious drain, Siri!   I turned off all notifications?  I turned off all the location based applications (so much for running up points on foursquare)! I even turned off the GPS and Bluetooth!

Nothing seemed to work?  I benched marked my iPad2 against my iPhone 4s.  The iPhone battery would be dead in less than a single day.  The iPad with all the applications on, that I had switched off in the iPhone, ran for two days before needing a battery charge.  My wife, who had my hand me down previous iPhone 3G did not have the problem.   The issue seemed to be specific to the iPhone 4s! The iPhone 4s battery gauge looked like the gas tank indicator on a Ferrari, moving from F to E in record time.   Maybe it was 3G data when no WiFi was available?  Nope, I turned that off, even though I did not have to do it with my iPad.   Email notifications were set to manual?

I began to scoure the Internet and could not find a single solution, though I found a recurring theme.  Apparently, when you travel with an iPhone 4s, especially outside of the US, this basttery strangeness is a real issue for everyone.   I can find no statement from Apple on this subject thought the forums seem to be filled with people sharing the same experience.   I am particularly certain it is unique to the iPhone 4s as my iPad did not have the problem nor did the older iPhone 3G?

Magically, on return to San Diego my home turf, the problem just went away.  My battery lasts the entire day with all the applicaitons, notification, Gmaill, Siri and GPS turned on!   Migrating Alpha Pariticles?   I know I am not the only peron to have this experience, so come on Apple, what is the story?