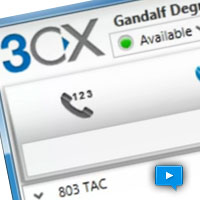 The trend in the Unified Communications industry is to charge a “per seat” license for access to VoIP Business Phone Solutions.  In large part a legacy “flat tax”  from the old TDM world, phone system suppliers continue to license based on the number of users that the system supports.   Microsoft, ShoreTel, Avaya and CISCO all seem to have software licensing based on the number of users.  Some licensing strategies become more complex as features and services are added.   ShoreTel has by the simplest licensing strategy of the major suppliers, but they do count the number of users as the base software license cost.   Additional license fees are assessed for “Professional” Communicators or Communicators that access Workgroup functionality for Agents and Supervisors.   It is all rooted, however, in the number of users the system will be hosting.

If we consider a simple 100 extension solution, ShoreTel will have a $20K software license fee before you purchase any of the required VoIP hardware.  Basically, you are paying $200 per user for an Extension and Voice Mailbox.  After you purchase your software license, you will still need to purchase handsets, gateways and servers! Microsoft, CISCO and Avaya, though significantly more complex in their licensing strategies, start from the same basic “per seat” model.    In fact, if you look across the  business communications landscape  all suppliers have to offer basically the same set of components   Yes, all automobiles are different,  but they generally have four wheels, a steering,  seats, dashboards and a power source!

Clearly this has a significant impact on your ongoing cost of support.    For reasons that I have yet to figure out, “technical support” is somehow a function of your system acquisition cost?   The industry trend is in the range of 10-20% of your total system cost, including software licenses, will then be used to calculate your ongoing cost for software insurance and technical support.    I know there are smarter people than I that have been working this out,  but I just cant see the relationship between the cost of equipment and the cost to service that equipment?   I get “making money”, but I don’t’ see the value relationship in punishing customers for buying more equipment?

Is there another model out there?  Are we forever bound to the “per seat” license model?  In fact there is another model out there!   Enter low profile, high performance, global provider of  Unified Communications, 3CX!    These guys amaze me and I think they are harbingers of how the communications industry will work as we move deeper into the 21st century.  Now hear this, they do NOT charge a “per seat” license!   Contrary to the industry trend, they also include most functionality that the other players generally “option”.  Full chat or IM services, presence, fax server, call center and mobility services, soft-phones, iPhone and Android applications are included with no “per seat” cost!   Then how do they bill for their software?   Simple.  They license based on “simultaneous connections”.    Clearly, if you have a 100 user system and a PRI for PSTN connectivity, all your users are not on the phone at the same time.   Why not pay only for the maximum number of live phone conversations that you project for your business?   3CX pricing ranges from 4 to 1024 simultaneous connections and that can cover both large and small deployments.  Lets assume that same 100 extension system and instead of $20K or $200 a user, you paid $5K to support 64 simultaneous phone calls?

This is not some small upstart trying to buy market share.  This company 3CX,  a certified  Microsoft Developer,  has been deploying on a global basis since 2006.   They have a fully formed, Unified Communications solution that can match the established players,  feature for feature.   They will not compete with ShoreTel and CISCO in the 1000 seat market, but in the larger 25-250 seat multi site segment, they are a serious contender.   Technical support is offered on a global basis, is astonishingly effective and uses a combination of traditional TAC center live remote support but leverages alternatives like video wiki, community, email and chat support. ( In future blogs, we will do the architecture comparison thing).

I know I am alone in the belief that you can not be both a hardware company and a software company!  I think you have to pick one side of the street and really do it well to create a defensible market share and posture for growth!   My Son argues that that is a ridiculous position, “just look at Apple they do both and have the best products on the market”?   Not withstanding Microsoft, I think that the issue of comparative size plays a key role in enabling a company to pursue both.    If you are a comparatively  smaller player (Market Cap: SHOR  $247M, APPL  $611B, CSCO 100B) I would argue that it is more important that you figure out if you are a hardware company or a software company!

I would identify 3CX as a software company that you need to pay very close attention to!

To the sales team, I sound like a broken record as I repeated the engineering driven mantra: “A VoIP solution is only as good as the network it is build on”.     No matter how many times we tell clients that you can not obtain reliable, predictable toll quality voice communications over the public Internet, they insist on having us implement it.   The old marketing adage “you do not give customers what they need, you give them what they want” clearly applies and despite our best arguments to do otherwise; we find ourselves implementing VoIP solutions using VPN over DSL or Cable.   The good news is that when it works,  it is  often useable for inter-office communications.   When it does not work, it sounds like the worst cell phone  call and would not be something that you would use to support business communications with a client.

In the VoIP world in general and the ShoreTel world in particular, there is a measurable performance difference between an MPLS deployment and a VPN tunnel through the public internet.    An appropriately designed MPLS circuit with carrier Service Level Agreements in place will out perform the best VPN tunnel through the public internet.   Yet clients continue to believe they can put a VoIP handset  at the bosses house and run it over a DSL based VPN back to the “puzzle palace” and that it will  perform as well as the phone on his office desk.   The reality of the deployment is that this implementation seldom meets customer expectations.

A ShoreTel deployment of a remote handset for a home based work force can be accomplished under two basic models.   In the more desirable, albeit more costly model,  we create a “site” which involves the placement of a ShoreTel media gateway (read SG switch) at the remote location.  VoIP handsets interact with the SG media gateway or call manager at the remote location for all call setup, addressing, signaling and control.    In the ShoreTel world the call setup between a VoIP handset and an SG media gateway will use the MGCP protocol.   This protocol is a client/server or master/slave model and when compared with other protocols can generally be summarized as complex and “chatty”.   ShoreTel implements SIP for SG-SG communication, but uses MGCP for SG witch to handset call control.  Once a phone call is setup up, only the RTP media stream needs to traverse the VPN tunnel, however.

The other less expensive model s the placement of a remote VoIP handset only.   In this model, the handset is part of the “headquarters” site.  Unfortunately this is the deployment model we see the most when clients attempt to interconnect a single home worker with the corporate network with out the benefit of a carrier SLA.     A DSL, hopefully with a static IP address, and a device that can support a “point-to-point” VPN tunnel are the “minimum daily adult” requirement for VoIP connectivity.   In this model, the VoIP handset is communicating MGCP over the VPN tunnel with a call manager at the headquarters location.  Every handset action, from off-hook to digit key depress, is communicated over the VPN tunnel back to a media gateway at the home office.  Very “chatty”.

As engineers we can talk ourselves into a coma when discussing QOS options, DSCP markings, router queuing strategies and bandwidth reservation parameters.   At the end of the day, however, the only QOS “opinion” that really matters is what the users thinks!   Mean Opinion Score or MOS is the measure of what users rate the quality of a phone call.   Here is what we have learned after supporting hundreds of remote users on none SLA based circuits, typically VPN over DSL and Cable.   Rule one:  use only symetrical circuits (same up and down load speeds).  Rule two: Hard phones beat soft phones; and Rule three:  SIP phones beat MGCP phones.  It is that simple.   If we put a SIP based phone at a remote location, they will out perform an MGCP based handsets on the same circuit as measured by user MOS!  The SIP phone will perform with a higher level of reliability, be more resilient to latency and jitter, and will experience significantly less call disconnects than an MGCP based VoIP handset.

If you study the hosted VoIP service provider market, you will find that the predominant VoIP handset deployment strategy is SIP based.   Why is that?  We could go completely geek on you and  illustrate the complexity of call setup comparing MGCP with SIP setup messages, but why bother.  MOS rocks.  In this environment SIP deployments will yield higher customer satisfaction scores than MGCP deployments.   We are sincerely hoping and praying that ShoreTel has a “SIP firmware load” on the product road map to support their family of outstanding desktop handsets as they do not have a SIP handset solution.    Currently, when we have to support remote workers who insist on running VPN tunnels over DSL and Cable, we deploy Polycom and Aastra handsets to achieve maximum customer satisfaction in the wild west of internet telephony and home based workers!